What is a custom motorbike ?!

According to Wiki, a custom motorcycle is a motorcycle with stylistic and/or structural changes to the ‘standard’ mass produced machine. Custom motorcycles might be unique, or built in limited quantities.

Therefore, iIt is a bike which is no longer exactly how it came off the manufacturing line. To that extent even my bike with its changed silencer and few add-ons is customized. But is that enough to make it a custom bike? I would say no!
Let’s dig back a little to understand where this all started out.
So, bikers have been altering the look of their rides forever but the first bikes that were called ‘custom’ actually put in an appearance around the late ‘50s in the USA. Choppers and Bobbers were among the original ‘Custom’ bikes. The movement of custom which started back then is still on and continues to this day with somewhat of a resurgence in recent times. Shows like building your own chopper etc. are testament to this as is the resurfacing of a phenomenon called pin-striping. This is the specific free-hand painting done on custom bikes (and cars). There are some very popular names in pin-striping from the 50s who have now spawned companies with pre-made custom prints (don’t miss the irony inbuilt here).
There are also some big names globally for custom bikes, Ron Finch is probably one you might have come across most often. His site shows some really radical designs. I would suggest looking it up.

Before we dive into custom motorbikes completely let’s take a pit-stop to look at the movement called Kustom Kulture. This is the movement encompassing custom bikes, hot rods, drag racing, tattoos, hard rock and heavy metal music and all things associated with them. It started around the same time as custom bikes and cars. The movie Grease is set very much in to the Kustom Kulture era, part of a sub-culture called Greasers. The tattoo and sticker designs you see of enmeshed parallel lines similar to what Vin Diesel sports also owe their origins to this era. The American concept of the Kustom Kulture was very much car oriented, known for hot rods etc. The British concept was more exclusively around motorcycles with the Café Racer culture picking up around the same time. Always thought the Brits were more my kinda people.
There now that I have that off my chest, let’s get on with the business of custom bikes. 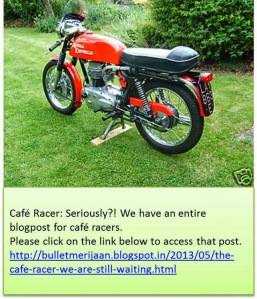 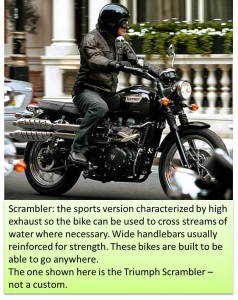 So, there are custom bikes and then there are Custom bikes.
Smart manufacturers who keep close to the pulse of their riders (sorry, RE do not yet feature in this bunch) have done their best to launch bikes which attempt to meet the Custom Biker’s tastes. Harley Davidson launched the ‘custom’ bike Super Glide. Designed by Willie G Davidson, taking from the custom movement of that time it combined the fork of a sportster with the frame and engine of a big twin. This is still seen in the custom Dyna range, check out the latest custom promise for the Dyna Street Bobs
Others like Honda and Yamaha have also jumped on this opportunity with their own ‘custom’ variations. There are also other big volume custom manufacturers mostly in the States American IronHorse, Bourget, Big Dog and BMC. They make bikes which are off the shelf, as it were, but can be customized by choosing parts and paints from the factory.
But seriously you and I both know these are still mass manufactured bikes not the really real Custom bikes.
So we come to the next category of custom bike makers. These chaps take a given bike and bolt on stuff to the bike. Again these custom bike makers are of two types. The first one makes custom kits, i.e. they make a set of items that can be bolted on to your bike and change the complete look of the bike. Some of these are purely cosmetic and some of these changes can be functional too, such as changing the handlebars, lowering the seats etc..
The second type is the people who will build all the parts (except the engine) from the ground up and make a bike that is unique to you. They will first discuss the type of bike you want and based on your specifications and desires they will build something from the ground up.
In India this phenomenon is certainly on the rise. There are a few companies offering custom bikes to enthusiasts. Two such companies that I have come across are Dreamriders and Rajputana Customs.
On a recent visit to Jaipur I had the pleasure of visiting the Rajputana Customs workshop and meeting the charismatic founder, Vijay Singh. They have an extremely cool workshop, I saw quite a few bikes under construction there. According to Vijay the custom bike scene in India is picking up quite a bit. He is kept busy round the clock by customer demand and typically has enough business for the next year or more. He does not take on more than that, if he did then there would be even more bikes in the pipeline.

Unfortunately there were no finished bikes on the scene, understandably so. All the finished bikes get shipped immediately off to customers. There was Vijay’s first custom made bike – a hard tailed bobber made from a RE. It was gorgeous, you can see it here in photographs. The blurb will explain what a bobber is and how it is different from a chopper.
The most popular bike that was being built, I saw at least 3 of them under construction in the workshop was the one with a monster rear tyre and almost chopper like front suspensions. To me it looked like Batman’s bike. I would love to see one of these on the road. The engine in these was the Harley 883 engine.

We chatted a bit about bikes and Vijay expressed how he would rather build more classical looking vintage bikes than the huge ones that he is currently building. The vintage being more to his personal taste.

How they go about doing it – They take the engine of the bike that the customer supplies; then they build everything else custom, from the ground up, made to specs discussed with the customer and build most parts in their own workshop.
For a bike enthusiast it is a place that you absolutely must visit.Sitting around were such beautiful BSAs and Triumphs it was a pleasure just being there sharing the space with them.

I will try and call on the Dreamriders next and will document that too.
Until then, keep riding.